More
This documentation does not apply to the most recent version of Splunk® IT Service Intelligence. Click here for the latest version.

Use Episode Review as part of your episode triage workflow. You can monitor episodes and the actions that analysts take to resolve the issues that triggered an episode.

ITSI groups notable events into episodes according to the rules defined in the default aggregation policy or a custom policy you created. See Overview of aggregation policies in ITSI for more information.

When you identify an episode that requires investigation, the first step is to acknowledge the episode. Acknowledging a episode changes its status from New to In Progress and assigns the owner to the current ITSI user.

Accelerate triage with filters and sorting

Speed up your episode triage with search filters and sorting. For example, focus on specific episodes with the search filters and time range selector. Episodes contain Severity, Status, and Owner fields to help you categorize, track, and assign them.

Use the Add filter option to filter episodes by one or more attributes, such as owner, severity, or specific event fields within the episode. Only episodes containing the selected values are shown. You can use the wildcard (*) character to support partial matching of attributes and values. Attributes and values are case insensitive. The suggested values are fetched based on the time range applied to Episode Review. The number of values displayed in the menu is capped, so there might be cases where a notable exists but isn't listed as a suggested value.

Click the Sorted by dropdown to select an attribute by which to sort episodes. For example, if you select Severity, the episodes are listed in order of highest to lowest severity level, and sorted secondarily by time. Click Add sub-sort to sort against additional episode attributes. The sort operates hierarchically from left to right, meaning episodes are sorted by the first attribute, then those with an identical first attribute are sorted by the second attribute, and so on. You can sort by a maximum of three attributes. Use the arrow (

) to switch between ascending and descending order.

Use the search box to search for specific text in an episode. You can use an asterisk as a wildcard character. To search for a specific phrase, enclose the phrase in double quotes (for example: "service level alert"). The search field is case insensitive.

Save a custom view of Episode Review

To save a filtered view of Episode Review, click Save as... and give the view a meaningful name. To access the saved view in the future, click the tab in the top left to pull out the Saved Views panel. 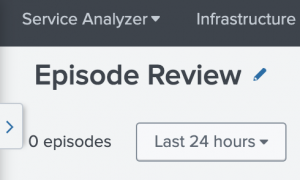 To automatically refresh the dashboard at specific intervals, click the gear icon

and specify the auto refresh period.

Episodes are unassigned by default. You can assign one episode at a time, or several at once.

Prerequisite
You must have the itoa_admin, itoa_team_admin, or itoa_analyst role to assign episodes to a user.

If you use SAML authentication, it can take up to 10 minutes to update the list of users that you can assign episodes to.

Update the status of an episode

New episodes have the New status. As analysts triage and move an episode through the episode review workflow, the owner can update the status of the episode to reflect the actions they take to address it.

If your changes are not immediately visible, check the dashboard filters. For example, if the filter is set to "New" after you changed an episode to "In Progress", your updated episode will not display.

You can choose from the following episode statuses.