For example, a major issue occurs in a server room, which leads to a high-priority incident being raised. The episode can potentially impact all users, so it's important to bring together key representatives to communicate quickly and effectively. Episode Review can facilitate this communication process and help resolve the source issue.

The goal of Episode Review is to restore normal service operation while minimizing impact to business operations and maintaining quality. The dashboard displays a unified view of all your service-impacting alerts as episodes in their current state.

Any user can assign an episode to themselves and track it through the entire episode lifecycle until a service is restored and the issue is resolved. 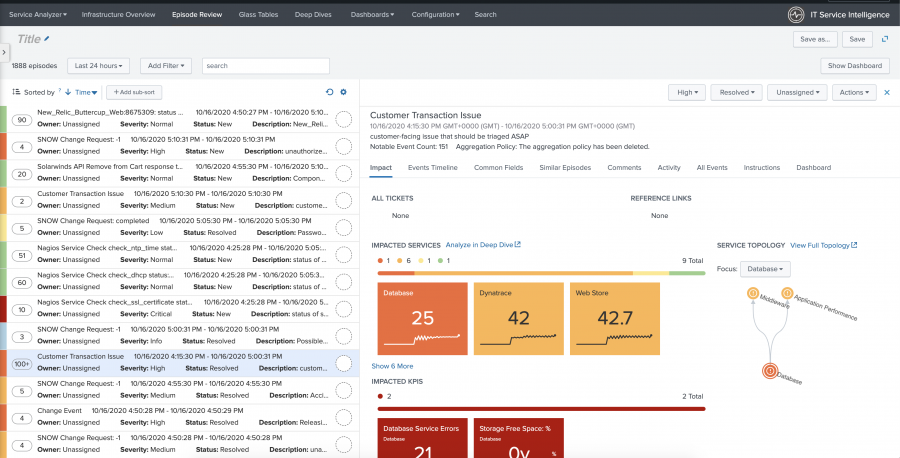 What are notable events?

An episode represents a disruption of service operation causing impact to business operations. It's a deduplicated group of notable events occurring as part of a larger sequence, or an incident or period considered in isolation.

Examples of application-level episodes could be service unavailability, a data issue, an application bug, or disk-usage threshold exceeded. Examples of hardware episodes include server issues, network issues, or system issues. The Episode Review dashboard is designed to separate and organize these issues in your IT environment so that analysts can effectively triage, investigate, escalate, and resolve them.

Use Episode Review to gain insight into the severity of episodes occurring in your system or network. Triage new episodes, assign episodes to analysts for review, and examine episode details for investigative leads. You can perform various actions on episodes, including running a script, sending an email, creating a ticket in an external ticketing system, adding a link to a ticket in an external system, and any other custom actions you configure.

Lifecycle of an episode

Episode Review is responsible for managing the life cycle of episodes from creation to closure. The episode management process has several statuses, each of which is important to the success of the process and the quality of service delivered.

An episode can have the following default statuses: