What happened to the rest of this manual?

How data moves through Splunk Enterprise: the data pipeline

Data in Splunk Enterprise transitions through several phases, as it moves along the data pipeline from its origin in sources such as logfiles and network feeds to its transformation into searchable events that encapsulate valuable knowledge. The data pipeline includes these segments:

You can assign each of these segments to a different Splunk Enterprise instance, as described here.

This diagram outlines the data pipeline: 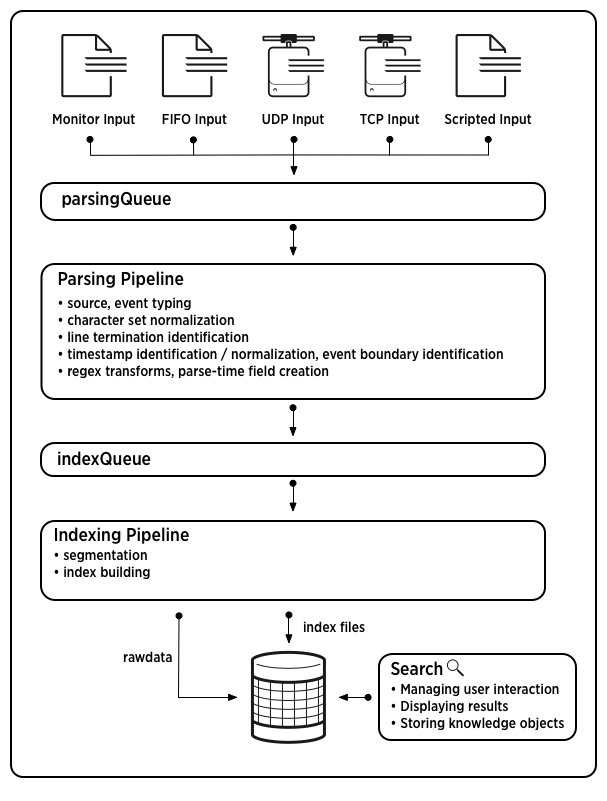 Splunk Enterprise instances participate in one or more segments of the data pipeline, as described in "Scale your deployment".

Note: The diagram represents a simplified view of the indexing architecture. It provides a functional view of the architecture and does not fully describe Splunk Enterprise internals. In particular, the parsing pipeline actually consists of three pipelines: parsing, merging, and typing, which together handle the parsing function. The distinction can matter during troubleshooting, but does not ordinarily affect how you configure or deploy Splunk Enterprise.

The data pipeline and structured data

For certain types of structured data - data that resides in a file that has headers and fields separated by specific characters - not all components of this pipeline apply. When you collect structured data, you must configure data collection so that it arrives at the indexer in the format that you want. In environments with forwarders, this must happen at the forwarder. See "Extract data from files with headers".

In the input segment, Splunk Enterprise consumes data. It acquires the raw data stream from its source, breaks it into 64K blocks, and annotates each block with some metadata keys. The keys apply to the entire input source overall. They include the host, source, and source type of the data. The keys can also include values that are used internally by Splunk Enterprise, such as the character encoding of the data stream, and values that control later processing of the data, such as the index into which the events should be stored.

During indexing, Splunk Enterprise takes the parsed events and writes them to the index on disk. It writes both compressed raw data and the corresponding index files.

For brevity, parsing and indexing are often referred together as the indexing process. At a high level, that's fine. But when you need to look more closely at the actual processing of data, it can be important to consider the two segments individually.

A detailed diagram that depicts the indexing pipelines and explains how indexing works can be found in "How Indexing Works" in the Community Wiki.

Splunk Enterprise's search function manages all aspects of how the user sees and uses the indexed data, including interactive and scheduled searches, reports and charts, dashboards, and alerts. As part of its search function, Splunk Enterprise stores user-created knowledge objects, such as saved searches, event types, views, and field extractions.

For more information on the various steps in the pipeline, see "How indexing works" in the Managing Indexers and Clusters of Indexers manual.

How data moves through Splunk Enterprise: the data pipeline