One of the most common forwarding use cases is to consolidate data originating across numerous machines. Forwarders located on the machines forward the data to a central Splunk Enterprise indexer. With their small footprint, universal forwarders ordinarily have little impact on their machines' performance. This diagram illustrates a common scenario, where universal forwarders residing on machines running diverse operating systems send data to a single Splunk Enterprise instance, which indexes and provides search capabilities across all the data: 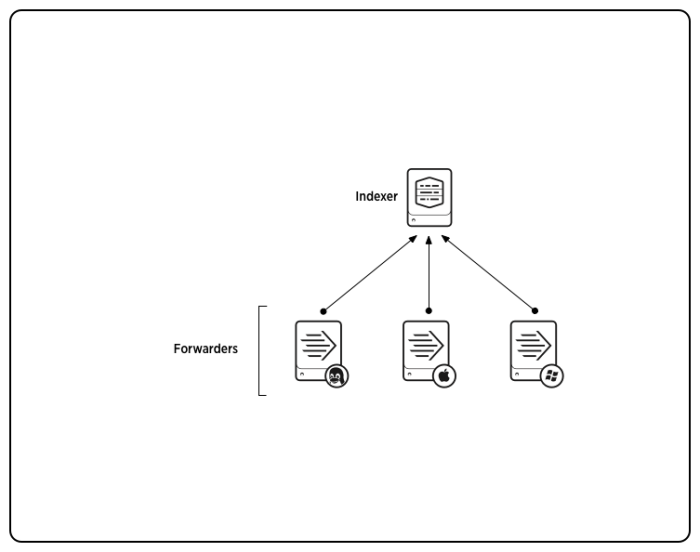 The diagram illustrates a small deployment. In practice, the number of universal forwarders in a data consolidation use case could number upwards into the thousands.

This type of use case is simple to configure:

1. Determine what data, originating from which machines, you need to access.

2. Install a Splunk Enterprise instance, typically on its own machine. This instance will function as the receiver. All indexing and searching will occur on it.

3. Enable the instance as a receiver through Splunk Web or the CLI. Using the CLI, enter this command from $SPLUNK_HOME/bin/:

For <port>, substitute the port you want the receiver to listen on. This also known as the "receiver port".

After you have downloaded the relevant app, remove its inputs.conf file before enabling it, to ensure that its default inputs are not added to your indexer. For the Windows app, the location is: $SPLUNK_HOME/etc/apps/windows/default/inputs.conf.

5. Install universal forwarders on each machine that will be generating data. These will forward the data to the receiver.

6. Set up inputs for each forwarder. See "What Splunk Enterprise can index".

7. Configure each forwarder to forward data to the receiver. For Windows forwarders, you can do this at installation time, as described here. For *nix forwarders, you must do this through the CLI:

For <host>:<port>, substitute the host and receiver port number of the receiver. For example, splunk_indexer.acme.com:9995.

Alternatively, if you have many forwarders, you can use an outputs.conf file to specify the receiver. For example:

You can create this file once, then distribute copies of it to each forwarder.