Forwarder types for getting data into Splunk Cloud

Usually, to get data from your customer site to Splunk Cloud, you use a forwarder. There are two types of forwarders that you can use to get data in:

Use a deployment server to deliver configurations to multiple forwarders

Use a universal forwarder to get data into Splunk Cloud

The universal forwarder does not parse log sources into events, so it cannot perform any action that requires the ability to format the logs. It also ships with a stripped-down version of Python, which makes it incompatible with any modular input apps that require a full Splunk platform to function. It is normal for a large number of universal forwarders (from hundreds to tens of thousands) to be deployed on endpoints and servers in a Splunk platform environment and to be centrally managed, either with a Splunk deployment server, or a third-party configuration management tool, such as Puppet or Chef. 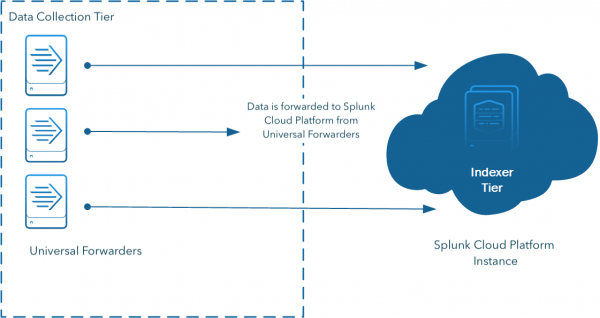 Use a heavy forwarder to get data into Splunk Cloud

The heavy forwarder has the following characteristics:

If you want to set up a heavy forwarder to send data in Splunk Cloud, request a deployment server license from Splunk support to allow them to carry out functions above and beyond what is covered by the forwarder license. See Data Collection in the Splunk Cloud Service Description.

The IDM is a hosted solution for Splunk Cloud for scripted and modular inputs. In a majority of cases, an IDM eliminates the need for customer-managed infrastructure. IDM lets you send Cloud inputs, such as Azure or AWS data to Splunk Cloud without using a forwarder. However, an IDM is not a one-to-one replacement for a heavy forwarder. You must still use a heavy forwarder if you need to perform parsing or activities other than standard scripted and modular data inputs. As a best practice, install cloud-based add-ons on an IDM, and install on-premises-based add-ons on a universal forwarder or heavy forwarder.

If the add-on is tightly integrated with an Enterprise Security search head, do not use an IDM.

The following diagram shows the typical topology for an IDM in which data is sent directly from a Cloud data source to the IDM: 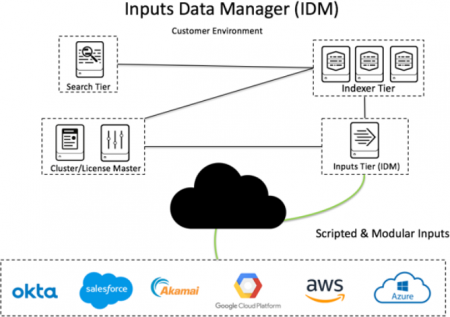