A server class maps a group of deployment clients to one or more deployment apps. By creating a server class, you are telling the deployment server that a set of clients should receive updates in the form of a set of apps.

A client grouping can be based on a variety of criteria, such as machine type, OS, geographical area, or application type. 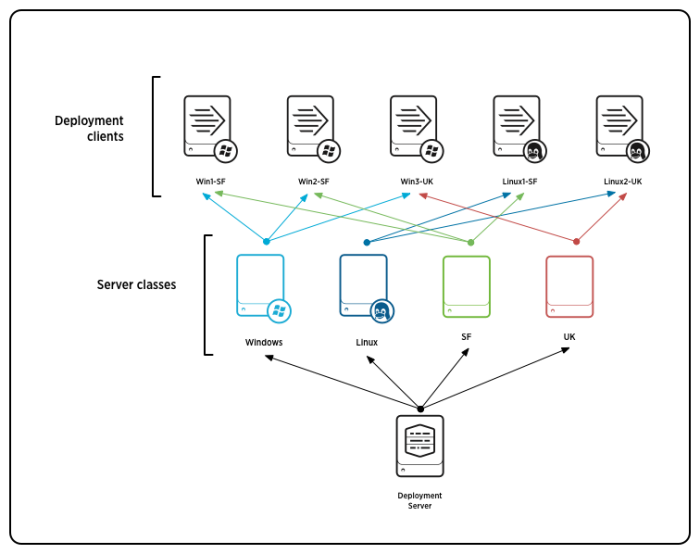 In this example, each deployment client is a Splunk Enterprise forwarder that belongs to two server classes, one for its OS and the other for its geographical location. The deployment server maintains the list of server classes and uses those server classes to determine what content to distribute to each client. For an example of how to implement this type of arrangement to govern the flow of content to clients, see "Deploy configurations to several forwarders".

You define server classes on the deployment server with these steps:

2. Specify one or more deployment apps for the server class.

3. Specify the clients that belong to the server class.

This section provides an overview of these steps. The specifics of the configuration process depend on the method you use to create the server class: the forwarder management interface or direct editing of serverclass.conf. See "Ways to define server classes".

Create and name the server class through the forwarder management interface or directly in serverclass.conf.

2. Specify apps for the server class

3. Specify clients for the server class

Next, you need to associate clients with the server class. You do not ordinarily specify clients individually. Instead, you set up filters that dynamically determine which clients belong to the server class, based on common identifiable characteristics.

When the forwarder management interface configures server classes, it writes the definitions to a copy of serverclass.conf. You can also edit serverclass.conf directly, and you might need to do so for some complex configurations.

Important: Server class names must be unique across all serverclass.conf files.