To ensure data is successfully ingested into the Splunk platform, configure your clients with the ability to act on response codes returned by the HEC endpoint. If the client can't take an action based on the resulting response code, data loss might occur. For more information, see Possible error codes. 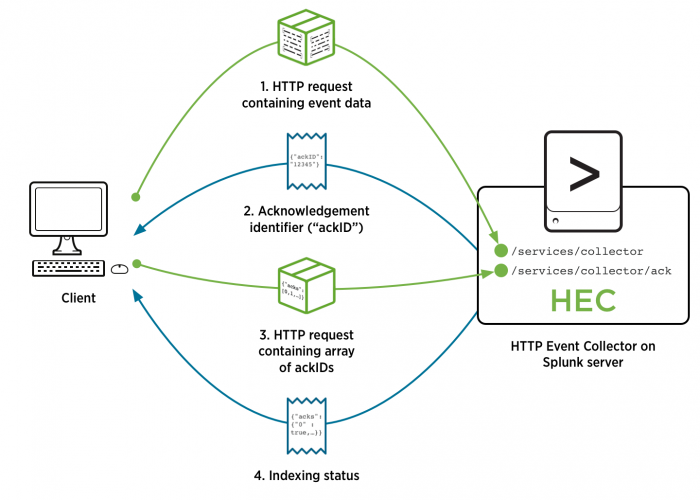 When you create a new HEC token in Splunk Web, select the checkbox on the first screen labeled Enable indexer acknowledgment. Then continue with the token creation process.

You can enable indexer acknowledgment for existing tokens by editing the HEC inputs.conf file.

You must include a matching channel identifier both when sending data to HEC in an HTTP request and when requesting acknowledgment that events contained in the request have been indexed. If you don't, you will receive the error message, "Data channel is missing." Each request that includes a token for which indexer acknowledgment has been enabled must include a channel identifier, as shown in the following example cURL statement for Splunk Cloud, where <customer> indicates the account-specific portion of a Splunk Cloud URL, and <data> represents the event data portion of the request:

Indexer acknowledgment also works with raw JSON data. In that case, the endpoint to use in requests is /services/collector/raw. For more information, see Format events for HTTP Event Collector.

Once you enable indexer acknowledgment for a token, every request sent to HEC using that token will return the following acknowledgment identifier (ackID) contained in a simple JSON object to the sender, where <int> represents a unique integer identifier that corresponds to the request:

Acknowledgment IDs and their corresponding status information are cached in memory. To prevent the server from running out of memory, and to prevent malicious or misbehaved clients, several new limit settings have been introduced. To prevent channels from being overloaded, and to prevent an excessive number of channels from being created, several new settings have been introduced to the http_input stanza in the limits.conf file: