You can install Splunk App for Stream on a single Splunk Enterprise instance. A single instance serves as both a search head and indexer, accepting direct data streams along with storing and searching the data. A single instance deployment, which is ideal for a lab or test environment, can support one or two users running concurrent searches.

For a distributed deployment of Splunk App for Stream:

Install Splunk App for Stream (splunk_app_stream) on one or more search heads.

Install Splunk_TA_stream on all indexers.

Install Splunk_TA_stream on any number of universal forwarders at the location(s) where you want to capture network data. See "Network collection architectures."

In a small, single search head deployment, both the deployment server and Distributed Management Console (DMC) components can run on the same Splunk Enterprise instance on which you install splunk_app_stream. 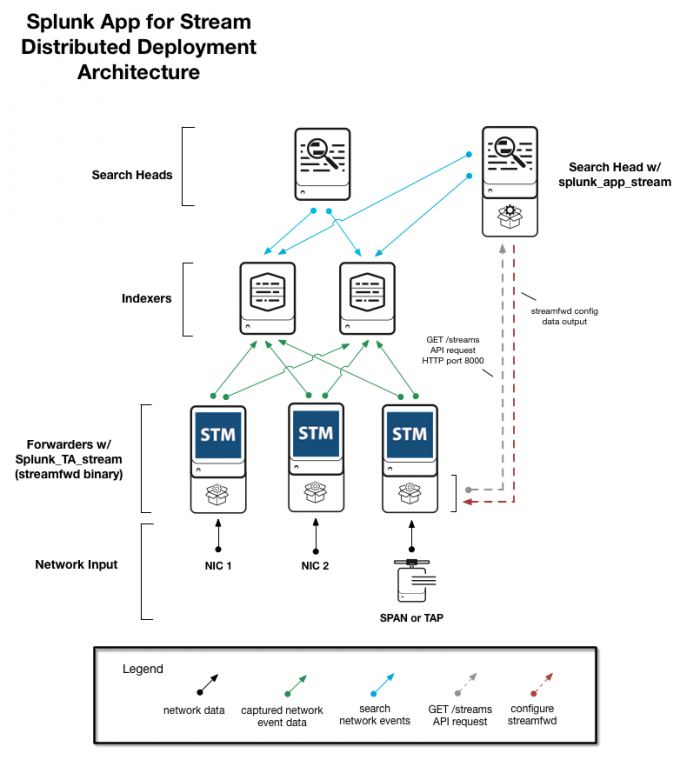 Use the Streams Config UI inside splunk_app_stream to configure the specific wire data protocols (such as http, tcp, dns) that you want the streamfwd binary to capture.

Use the streamfwd.xml file in Splunk_TA_stream/local to configure system-level parameters (specify IP address/ports, add network interfaces, enable SSL, and so on) for the streamfwd binary. See "Configure Stream forwarder".

While you can use multiple search heads to search and analyze captured network event data on your indexers, you do not need to install splunk_app_stream on more than one search head.

The streamfwd binary pings splunk_app_stream at regular intervals over HTTP port 8000. If streamfwd detects a change in the Streams UI configuration, it sends a GET request to the /streams REST API endpoint to retrieve the updated streamfwd configuration data.