Based on our test data, Splunk App for Stream uses approximately 14% of a single CPU core for each 100 Mbps TCP traffic processed, when using the default streams configuration (only the udp and tcp flow data streams are enabled). This increases to approximately 21% when application layer protocol processing is enabled for unencrypted traffic (by enabling the http stream), and approximately 29% when the traffic is encrypted using SSL. 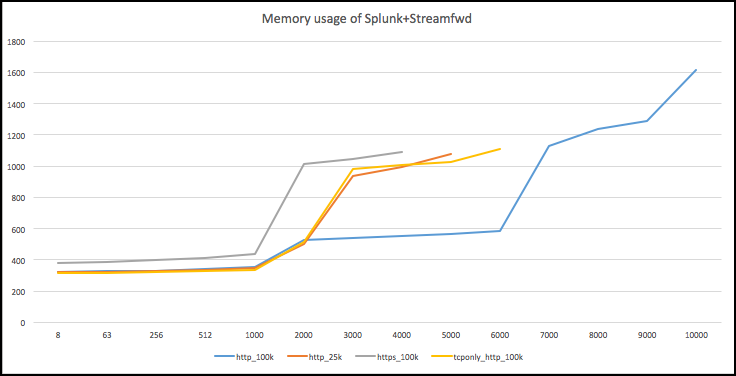 The maximum number of stream forwarders (streamfwd) that a Splunk App for Stream deployment can handle depends on the value of the PingInterval in streamfwd.xml. Based on our tests, a single CPU core running Splunk App for Stream can process approximately 150 pings + stream configuration requests per second.

Use this formula to calculate the maximum number of stream forwarders your deployment can handle:

The default PingInterval setting is 5 seconds, so a single CPU core should be able to handle up to 750 stream forwarders at peak activity (during startup up or when stream configuration changes are made).

Note: Based on our tests, during average usage, a single CPU core running Splunk App for Stream can process approximately 400 ping requests/second. However, the startup load on the CPU is significantly higher because streamfwd must both send a ping request and pull down the full configuration from splunk_app_stream.