More
This documentation does not apply to the most recent version of Phantom. Click here for the latest version.

Endpoints for all Splunk Phantom deployments

This table shows a list of the internet endpoints that a Splunk Phantom deployment uses. This list is not exhaustive.

On a single instance on-premises deployment of Splunk Phantom where all services are contained on the same host, open these ports in addition to allowing the Endpoints for all Splunk Phantom deployments.

If you opt to deploy services such as Splunk Enterprise or Splunk Cloud, PostgreSQL, or a file share separately from your Splunk Phantom deployment, you need to make sure that Splunk Phantom can reach those services on your network.

Open these ports on each Splunk Phantom node for embedded Splunk cluster configuration.

If you are using the non-embedded version of Splunk Enterprise, open these ports on each Splunk Phantom node.

A single instance, on-premises deployment of Splunk Phantom uses the local file system to store files for the vault. You can choose to expand storage capacity by using an external file share.

You can use any file system that meets your organization's security and performance requirements for your external file shares. You need to configure any required mounts and permissions. See Supported file systems and required directories.

These following tables uses NFS and GlusterFS as an example for file shares. In a clustered Splunk Phantom deployment, these ports must be opened on each Splunk Phantom node, and in the case of GlusterFS, on each member of the GlusterFS server cluster.

When the Enable Mobile App toggle is in the ON position, Splunk Phantom launches a new daemon, ProxyD. ProxyD connects to the Splunk Cloud Gateway automatically at grpc.prod1-cloudgateway.spl.mobi, on port 443 using the gRPC protocol.

Splunk Phantom uses the gRPC protocol to communicate to mobile apps through the Splunk Cloud Gateway.

For other ports you might need to open, see Prerequisites and Requirements in the Install and Administer Splunk Cloud Gateway manual.

Here is an example of the default settings for firewalld when Splunk Phantom is deployed as an unprivileged cluster. Splunk Connected experiences apps access is not enabled in this example.

A Splunk Phantom cluster consists of a load balancer, three or more Splunk Phantom nodes, a PostgreSQL database, file shares, and either a Splunk Enterprise or Splunk Cloud deployment.

This diagram shows an example of a Splunk Phantom cluster, with the connections marked. 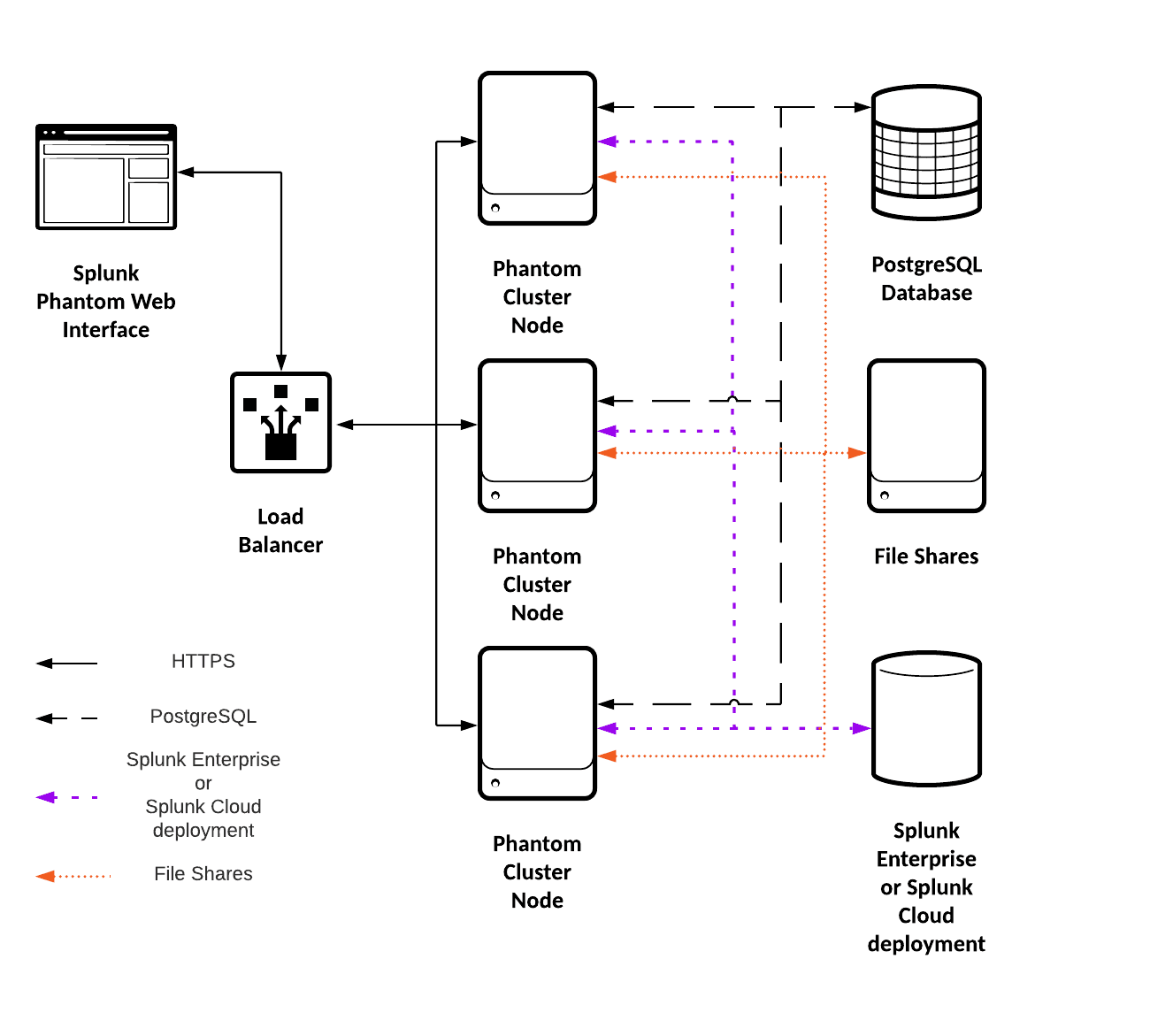