This image summarizes the steps you need to take to push anomalies and threats from Splunk User Behavior Analytics (UBA) to Splunk Enterprise Security (ES) as notable events.

Perform the following steps to verify that the Splunk Add-on for UEBA is installed.

The following procedure uses the Splunk default certificates and the global [SSL] stanza in the inputs.conf file. For better security, consider using your own certificates, or commercially signed certificates from a trusted certificate authority.

Perform the following tasks on the Splunk UBA management server:

Set up Splunk UBA to send data to the Splunk search head or a Splunk forwarder. Splunk UBA uses the output connector to send anomalies and threats to Splunk Enterprise Security.

If the output connector does not work, verify that you configured the host server correctly in the uba-site.properties file. The host identified in the file populates the host field for events sent to Splunk Enterprise Security or the Splunk platform. See Connect Splunk UBA to Splunk Enterprise to view an anomaly's raw events in Install and Upgrade Splunk User Behavior Analytics.

How threats and notable events are synchronized

Perform the following steps to change the retry interval:

When Splunk UBA and Splunk ES are integrated using an output connector, Splunk UBA creates a new custom status on Splunk ES called Closed in Uba as shown in the following image.

The status of threats in Splunk UBA and their corresponding notable events in Splunk ES are synchronized. 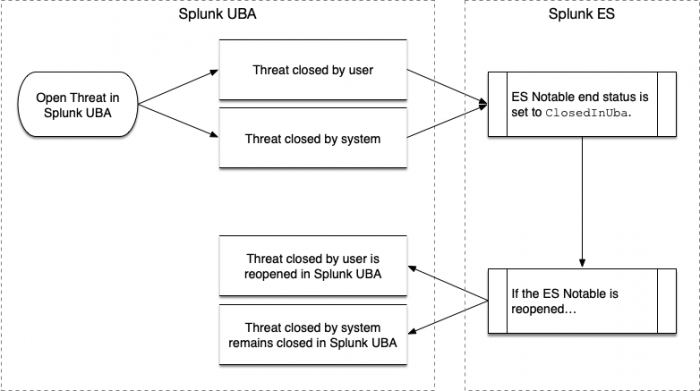 When the query detects that a notable event is closed, Splunk UBA checks to see if the corresponding threat is also closed. If not, the threat is closed with a status of ClosedbyUser as shown in the following diagram:

When the query detects that a notable event is not closed, Splunk UBA checks to see if the corresponding threat has a status of ClosedbyUser. If so, the threat is reopened with a status of Active as shown in the following diagram:

What happens if the output connector is unable to send threats to Splunk ES?