Splunk SOAR apps provide connectivity between and third-party security products and devices. Connector modules are written in Python and imported into Splunk SOAR as Python modules when packaged within an app.

When an action is run, the Splunk SOAR action daemon, actiond, invokes an executable that imports the appropriate module and runs the action. When invoked, an IPC connection is opened between the app and actiond. This communication is handled automatically.

App connectors leverage a Splunk SOAR supplied class called BaseConnector that is the main point of contact between the app connector class and .

Apps need to generate results of an action run. This result is abstracted in another class called ActionResult that the app connector uses.

An action is created in either through the UI or through a playbook. Depending upon the action and the asset it is run on, one or more apps are chosen and an action JSON containing the asset configuration and action parameters is created for each app that is run. The app connector Python module is loaded up and its member function '_handle_action' is called with the Action JSON as the parameter. A single instance of execution of the app connector is called an app run. Also a single app run occurs for a single action for example, 'block ip' or 'whois domain'.

Don't use the app connector class with implement _handle_action, use implement handle_action. Doing so allows the BaseConnector to use the action JSON first and it validates the parameters and event before the AppConnector::handle_action is called.

The following code is a snippet of the app JSON containing the metadata describing the configuration and action parameters, for an action called 'whois domain' of a sample whois app.

The following is an example of the action JSON containing the configuration and parameter dictionary, for an action called 'whois domain' that is passed from to the app.

At runtime, configuration and parameter dictionaries are never accessed directly from the app. Call the BaseConnector member functions to get access to these dictionaries.

The parameters key is a list of dictionaries. This is to facilitate multiple actions into one connector run. This means the BaseConnector::_handle_action calls AppConnector::handle_action multiple times, once each with the current parameter dictionary.

Called a second time with the parameter.

The following diagram represents the calls that occur between the BaseConnector and the AppConnector for a single connector run. 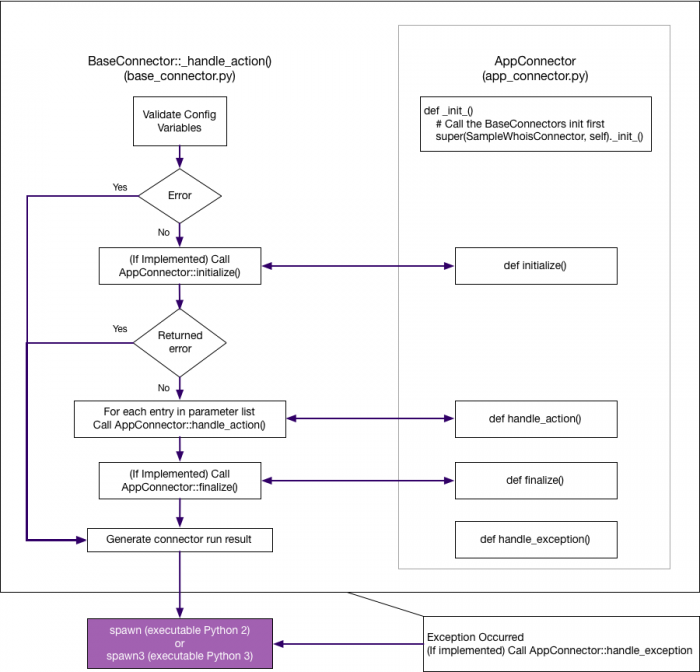 This function is optional and can be implemented by the AppConnector derived class. Since the configuration dictionary is already validated by the time this function is called, this is a good place to do any extra initialization of internal modules. This function must return a value of either phantom.APP_SUCCESS or phantom.APP_ERROR. If this function returns phantom.APP_ERROR, then the AppConnector::handle_action isn't called. For example, the SMTP app connects to the SMTP server in its initialize function. If this connection fails, then it returns an error and the BaseConnector does not call SmtpConnector::handle_action()

The App JSON contains information about each action including the parameters that it needs and which are required. BaseConnector uses this information to validate each parameter dictionary element. Similar to the configuration dictionary, string values are stripped and if found empty, deleted. If a required key is not present, this error is recorded for the current parameter dictionary and the call to AppConnector::handle_action is skipped.

This function implements the main functionality of the AppConnector. It is called for every parameter dictionary element in the parameters array. In its simplest form, it gets the current action identifier and then calls a member function of its own to handle the action. This function is expected to create the results of the action run that get added to the connector run. The return value of this function isn't used by the BaseConnector. Instead, it loops over the next parameter element in the parameters array and calls the handle_action again.

This function gets called once all the parameter dictionary elements are looped over and no more handle_action calls are left to be made. It gives the AppConnector a chance to loop through all the results that were accumulated by multiple handle_action function calls and create any summary, if required. Another usage is cleanup, disconnecting from remote devices and so on.

All code within BaseConnector::_handle_action is within a 'try: except:' clause. This makes it so if an exception occurs during the execution of this code it is caught at a single place. The resulting exception object is passed to the AppConnector::handle_exception() to do any cleanup of its own, if required. This exception is then added to the connector run result and passed back to spawn, which gets displayed in the Splunk SOAR UI.

All apps should handle exceptions in their code and return back a proper error message.

As noted previously, each connector run can have multiple internal actions that are carried out. In fact, it can have one action for each element of the parameter list. Each individual action can be represented by an instance of the ActionResult class. In the 'whois domain' sample action, two ActionResult objects are created, one for the whois action carried out for 'amazon.com' and another for 'google.com'. Each of these ActionResults are added to the connector result when the action is carried out. Once all the possible calls to AppConnector::handle_action are complete, the BaseConnector creates the connector run result, in JSON format, based off all the ActionResult objects that were added and sends it back to spawn.

One thing to note here is that the app writer does not create the result JSON. As actions are performed, ActionResult objects are created, and if they need to be part of the connector run they are added to the connector run using the BaseConnector interface. The ActionResult class contains member functions the app writer uses to set the status, message, and other information about the action. The creation of the result JSON is done automatically by the BaseConnector.

From an app author's point of view, the only part of a connector run that needs to be completed is the ActionResult list.

Each action result is represented by an object of the ActionResult class. The object encapsulates the following details about an action performed.

The output of the action can generate information which is added to the data section of the ActionResult object through the ActionResult::add_data(...) function. The 'output' key in the app JSON file describes the content of this data section. Add this key for every action.

parses this section and auto generates the documentation so a playbook writer gets all the required information about the output generated by the action. Rendering this data as a table like widget makes for a better view. This can be done easily by filling up certain keys in the 'output' section. matches the output of one action to the input parameter of another by matching the 'contains' keyword. This section allows the app author to specify the 'contains' of the data

All the required files of an app including the .json and .pyc files need to be placed in a TAR file. The TAR file contains a single directory containing all app files. For example, to create the installer TAR file of an app called samplewhois use the following command:

This TAR file can be used to install the app in a instance using the install app button found on the apps page.

Installed apps are placed in a sub folder created in the apps directory based on the app name and GUID following this format: /opt/phantom/apps/appname_<GUID>/. For example, the samplewhois app is installed in /opt/phantom/apps/whoissample_<GUID>/.

As mentioned in previous topics, the connector modules are called into by the spawn executable for every action carried out. Before spawn calls into various connector functions, it sets up the PYTHONPATH, which includes the Splunk SOAR library directory and the app installed directory. For the samplewhois example the path /opt/phantom/apps/whoissample_<GUID>/ folder will be part of the PYTHONPATH. This allows the app author to distribute modules that are internally used in the app with the app TAR file itself. As long as the app directory TAR filecontains an '__init__.py' ( or __init__.pyc) file distributed with it, the app can safely import modules it has distributed with the app. For example, you can place all the utility/helper functions within a set of files and distribute them with the app. The main connector file can then safely import them at runtime.

It's common for apps to use a REST API to communicate with an external device and use the Python requests module to do so. The requests module picks up the CA bundle file pointed to by the REQUESTS_CA_BUNDLE environment variable. comes with a CA bundle preinstalled on it through the phantom_cacerts rpm. The bundle file is located in your instance at /opt/phantom/etc/cacerts.pem. At runtime for every action that is executed, will set the the REQUESTS_CA_BUNDLE variable to the /opt/phantom/etc/cacerts.pem file before executing the action, so if the app is using the requests module, the CA Bundle will already be set for it to use.

There is a knowledge base article on the Splunk SOAR portal with instructions on how to install and troubleshoot using your own certificates and CAs, which can be found at https://my.phantom.us/kb/16.

Modify the verbose value to specify how the test connectivity is carried out. This action isn't going to be passed any parameters. It needs to work on the asset configuration only. The identifier key used in the previous example is test_asset_connectivity and must be implemented in the connector script. The action type is set to test. This needs to be the case since the UI checks for this value. Also the progress and results of the action are displayed in a dialog box synchronously so it is helpful to be a bit more descriptive by using the self.save_progress() or self.send_progress() function calls.

In , data sources are services or devices that supply information that you might want to store or act on. An app can support extracting such data from a device and ingesting it into Splunk SOAR by implementing the on poll action. An app's ingestion action handler can be called in two instances:

In each of the previously mentioned instances the parameters that are passed to the action and the action name identifier that is used are described in the following JSON.

If an app does not add this action to the app JSON, ingestion configuration and interactions like the Poll Now button aren't displayed on the corresponding asset.

This documentation applies to the following versions of Splunk® SOAR (Cloud): current