Splunk's table and chart drilldown actions enable you to delve deeper into the details of the information presented to you in tables and charts. With a simple click on a table row or a bar in a bar chart, you can kick off searches that drill down to provide more information about those discrete selections.

This topic provides some examples of this functionality as configured with simple XML via the visual dashboard designer. It also briefly goes over some of the drilldown functionality that can be configured through the advanced XML.

When you click on drilldown-enabled tables or charts, Splunk opens a separate window for the search.

Note: Drilldown functionality does not work for simple XML dashboard panels that are based on searches of summary indexes. To set up drilldown for dashboards utilizing these types of searches, you need to perform "custom wiring" with the advanced XML. For more information, see "Advanced drilldown behavior" in this topic.

For a general overview of Splunk visualization options, see "Visualization Reference," in this manual.

Overview of drilldown functionality for table and chart visualizations

Drilldown functionality enables you to click on the table or chart to set off a search that drills down for more detail on that table or chart. For example, say you have a panel based on this simple search, which runs over the past 24 hours:

From this search, you can get the following table visualization:

If this table is set up for row drilldown, when you click on the first row of the panel, Splunk will move to the Search view and run the following search:

...which provides detail information on the 404 error events associated with the PrettyPwnny referrer over the specified search duration.

Setting drilldown options for tables and charts in dashboard panels

For more information about using the Visualization Editor, see "Edit dashboard panel visualizations," in this manual.

Table visualizations in dashboard panels have three drilldown options in the Visualization Editor. They are:

For example, you could use a cell-click in a table resulting from a "timechart count by clientip" search, where the columns are values of clientip, like 192.168.0.14. The timeline for the resulting search shows when those events occurred during that period.

Dashboard chart visualizations such as bar, column, line, area, and pie charts have two drilldown options in the Visualization Editor. They are:

As we explain above, you have three basic drilldown options when you define chart visualization types with the Visualization Editor:

In general, when the search involved in the creation of the original table uses transforming commands, the drilldown wipes out the final transforming command and replaces it with arguments that drill down on the specific x-axis value or x- and y-axis value combination caught by the click. See the subsections below for examples of how this works.

When a table in a dashboard panel has a Drilldown value of Row, you can initiate drilldown searches along whole rows by clicking on them.

Imagine that you have a dashboard table that is based on this search:

In this table, a "row click" drilldown search would concentrate on the x-axis value of the selected row, which in this case would be a value of the series field, such as fs_notification: 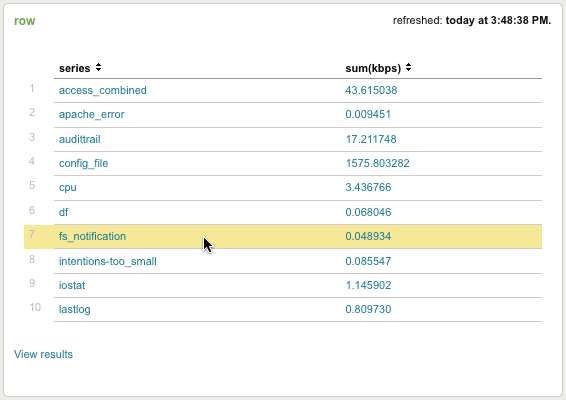 This click sets off the following search in the Search app, which finds six results:

When a table has a Drilldown value of Cell, you can initiate drilldown searches for specific cells by clicking on them.

Say you have a table generated by the following search: 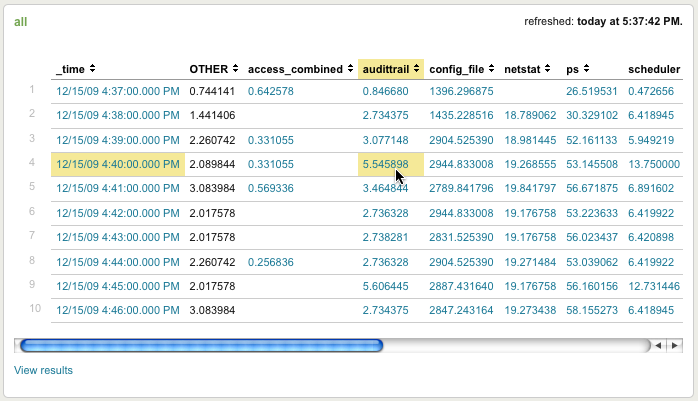 In this example, the clicked on cell initiates the following drilldown search over the 4:40:00pm to 4:40:59pm time range on 12/15/09 (the x-axis value) and adds a focus on the audittrtail value of the series field (the y-axis value):

Note that this drilldown search removes the last transforming command from the originating search.

Note: The y-axis value will not come into play in all cell drilldown searches. Cell-click interactions are designed to work with tables and charts generated by searches containing a "split by" clause. Cell clicks in charts based on reporting commands like timechart max(eps) min(eps) avg(eps) will always behave like row clicks. Such tables should always be configured for row-click drilldown; this approach is less confusing for users of the table.

As we mentioned earlier in this topic, when you define chart panel types with the panel editor, you use the Drilldown control to determine whether drilldown functionality is enabled for the panel:

In general, when the search involved in the creation of the original table uses transforming commands, the drilldown wipes out the final transforming command and replaces it with arguments that drill down on the specific x-axis value or x- and y-axis value combination caught by the click. See the subsections below for examples of how this works.

Drilldown searches on dashboard bar, column, line, and area charts behave differently depending on whether you click in the body of the chart or in the chart legend, if a legend is displayed.

In general, no matter what you click in the body of a row, column, line, or area chart, Splunk creates a drilldown search that:

Say you have a bar chart based on the following search:

In this chart, the x-axis is the processor value, while the y-axis is the cpu_seconds sum over the given time range (the last 60 minutes). 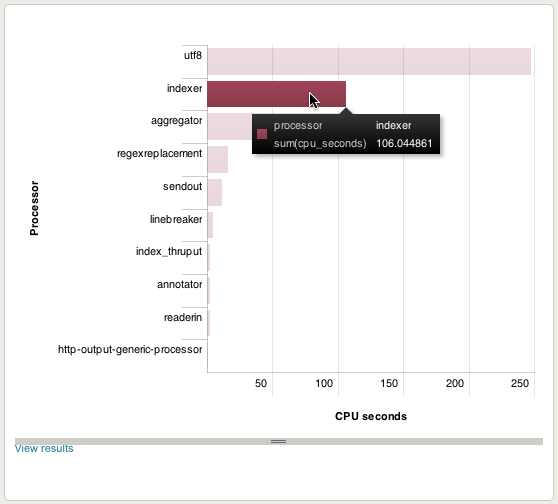 If you click in the body of this chart, the drilldown search drills down on the x-axis value represented by that bar:

Note that the drilldown search is identical to the original search except that the final set of transforming commands has been removed and a focus has been added on the aggregator value of processor.

Note: Sometimes the legend element is something that can't really be drilled down into, like avg(eps). Clicks on such legend items return an error message.

Pie charts provide identical drilldown behavior whether you click in the body of the chart--a pie slice, in other words--or the label pointing to that slice. Either way, the drilldown focuses on the value represented by the slice or label you click on.

So if the pie chart displays the top processors being utilized over the past 24 hours, and you click on the chart portion or legend item representing the indexer processor, then the drilldown search will be the same as the original, only with the transforming command removed and processor=indexer added. You'll get the same result if you click on the indexer label.

If you have a table panel with a column that represents a multivalue field, and you want to be able to drill down on discrete values of that mutlivalue field, you'll need to make changes to the XML beneath the panel in order to make the drilldown action work as expected. This fix involves the $click.value2$ destination value, which is usually used for charts, not tables.

For more information see the multivalue drilldown example in "Dynamic drilldown in dashboards and forms," in this manual.

If you're willing to delve into the XML code that your dashboard is built upon, you have the opportunity to set up a variety of useful dynamic drilldown interactions for your dashboard users that go far beyond what we currently enable via the Splunk Web interface.

For example, you can set up dashboards with drilldown actions that:

For more information about setting up these drilldown actions in dashboards and forms built with advanced XML, see "Customize drilldown options" in the Developing Views and Apps for Splunk Web manual.