Differences between SPL and SPL2

The Search Processing Language, version 2 (SPL2) includes the most popular commands from SPL, such as stats, eval. timechart, and rex. 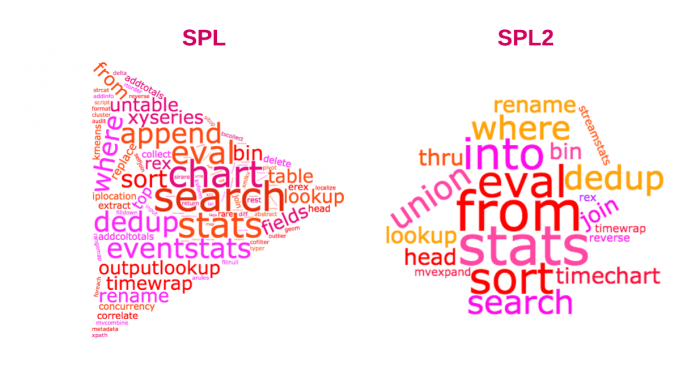 Command-specific differences are described in the usage topic for each SPL2 command.

If you are familiar with SPL, the following sections summarize the changes implemented with SPL2.

While working with SPL2 you will encounter a few new terms and concepts, which are described in the following table:

For more information, see Modules and SPL2 statements in the SPL2 Search Manual.

Unlike the current Search and Reporting app, an SPL2 module can contain multiple searches and other SPL2 statements in one file. This means that you can quickly switch back and forth between these searches and search results.

In addition, you can create custom functions (like macros) and custom data types to use in your searches and store all of these items with your searches in a single module.

For more information about modules and statements, see New terms and concepts.

Assigning a name to a search

|To use the results from one search as the dataset in another search, you must give the original search a name. The name must start with the dollar "$" symbol. For example: $mysearch1 or $threats_by_hour.

After the name, you must specify an equal symbol ( = ) and a generating command and a dataset name. For example:

Each search name in a module must be unique.

Valid generating commands are search, from, select, and union.

The search name is like a variable, which you can refer to in subsequent searches. For example, the name of the following search is $prod_lookup:

You can use the results of the $prod_lookup search as the dataset for another search by specifying the search name where you would specify the dataset:

The common command differences between SPL and SPL2 are described in the following sections.

Lists must be comma-separated

In SPL, commands were inconsistent about where options were expected in search syntax. In SPL2, command options must be specified before command arguments.

In this example, bins is the option and the field name, size, is the argument.

In the following SPL2 example, the dedup command option keepempty must be specified before the list of fields.

In SPL2, field names that contain anything other than a-z, A-Z, 0-9, or the underscore ( _ ) character, need single quotation marks. This includes the wildcard ( * ) and dash ( - ) characters.

This difference applies to the where and eval commands and the WHERE clause in the from command. It does not apply to the search command.

String values that contain anything other than a-z, A-Z, 0-9, or the underscore ( _ ) character, need double quotation marks. This includes the wildcard ( * ) and dash ( - ) characters.

The concatenation operator has changed

The search command in SPL2 works like it does in SPL, but is no longer implied at the beginning of a search.

You must specify the search command explicitly at the beginning of a search:

If you want to use SQL-like syntax with the same outcome as the search command, you can use the from command with a search literal. For example:

For more information, see Search literals in expressions in the SPL2 Search Manual.

The SPL2 from command is more like the SQL SELECT command. It has these clauses: FROM, JOIN, WHERE, GROUP BY, SELECT, ORDER BY, LIMIT, and OFFSET.

With SPL2 you can filter, sort, and project with the from command, without piping to other commands:

You can start the from command with either the FROM clause or the SELECT clause. The clauses can be specified in uppercase or lowercase.

All of the functions in SPL are supported in SPL2. A few functions have changed and others have become literals.

The count function must have parenthesis even when no value is specified.

The 'true()' function is replaced with a literal. Use 'true' instead.

The following commands have been converted into functions in SPL2:

In SPL, you can embed eval expressions and functions within any of the stats functions. For example:

In SPL2, evaluation expressions are supported directly in stats functions. For example:

The tagging for comments has changed in SPL2. In SPL, backtick characters ( ``` ) are used to add comments to searches.

Block comments can appear before, after, in the middle of your SPL statement. In this example, the block comment appears before the search statement:

In this example, the block comment is in the middle of the search, after the stats command and before the eval command. To help find the comment, the word COMMENT is placed at the beginning of the block comment.

Line comments use this tagging: //.

In this example, there is a line comments at the end of the line:

In this example, there are line comments at the end of each line and uses the word COMMENT to help quickly find each comment:

This documentation applies to the following versions of Splunk® Cloud Services: current

Differences between SPL and SPL2