Follow these usage guidelines to choose the correct term when you write about Splunk software.

The Splunk platform and Splunk software

Use the Splunk platform to refer to both Splunk Cloud Platform and Splunk Enterprise. Don't capitalize the "p" in "platform", and make sure you include a definite article.

Use Splunk software to refer to anything and everything the company offers. Don't capitalize the "s" in "software", and don't include a definite article.

When referring to these offerings, don't use the definite article "the" in front of the product name. After the first use in a heading and the first reference in paragraph text, you can remove "Splunk" to shorten the name. Don't use a three-letter acronym such as SIT, SSC, or SOC to refer to these offerings.

If necessary, distinguish between the entitlement tiers by adding the tier name after the product name, as in the following examples:

Choose the most specific and accurate term in each situation

When considering what noun to use when referring to a Splunk product, always use the most specific and accurate term that is appropriate for the situation. For example, you can refer to a product using a specific node or service of the product, such as a search head or deployment server. If you need a more general term, refer to the product by its product name, such as Splunk Enterprise or Splunk Cloud Platform, or its product category, such as the Splunk platform. If you must refer to both a platform product and an app, you can use the most general term, "Splunk software". The following diagram shows the level of specificity for Splunk product terms: 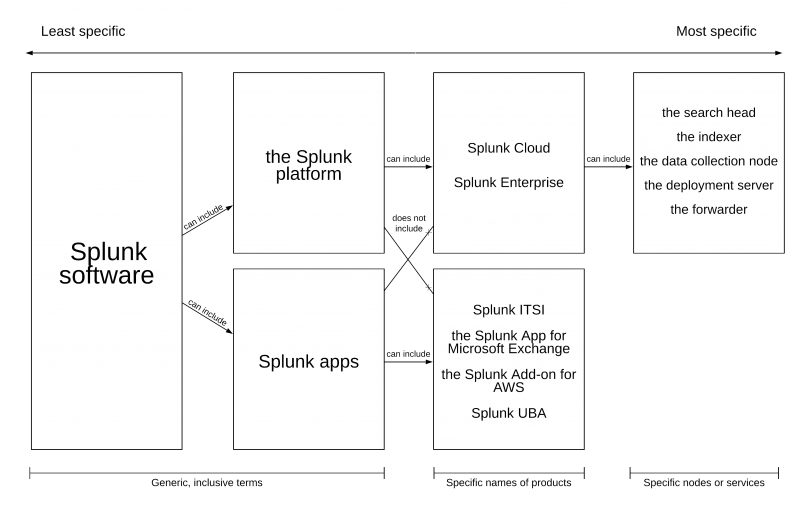 Use these guidelines to determine which term to write:

Here are examples of Splunk product terms in a sentence with an explanation of why the term in bold is the best term to use:

Still not sure which term to use?